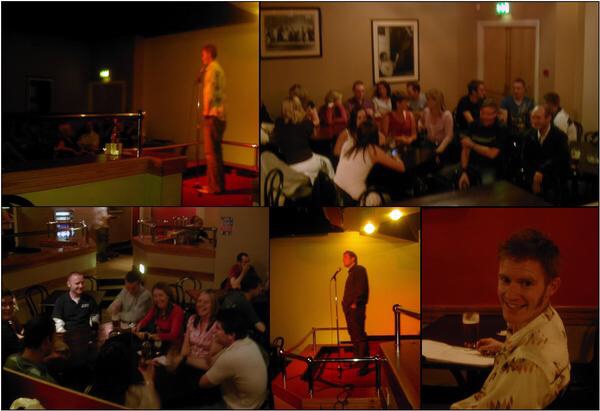 Happy 16th birthday to us!

Here’s how we got to where we are now and who helped us get there!

Ryan Gleeson was the M.C., the first comedian to ever perform on our stage, was Manchester based comedian, Des Sharples, followed by Cumbrian Sarah Ledger and headlined by Liverpool Mercury Comedian of the Year, Chris Cairns.

Sadly, 16 years later, Ryan Gleeson is still installed as resident M.C., but our line-ups have gone from strength, to strength.

After a year, we packed up our microphone and moved to a larger venue, at the Downtown venue, underneath the Station Pub.

At this location, we played host to comedians such as Jason Manford, Mick Ferry and Toby Hadoke.

We remained here, until the Station Pub closed its doors for the final time, before becoming Ma Kelly’s.

In our quest to keep live comedy a regular thing in the Fylde Coast, we found our next premises, thanks to Ian and Kelly Calvert, above The Edge, in Poulton.

We put shows on there on the first Thursday of every month and it’s at this location where we started to get a decent following, thanks to headline acts such as Joe Lycett Justin Moorhouse, Ivan Brackenbury, Tape Face, Lee Nelson and even comedy legend, Mick Miller

We stayed here for a number of  years, before, yet again, we had to move, due to the venue permanently closing.

Fortunately, we were invited to move our shows to the World famous Winter Gardens, right in the heart of Blackpool, however, due to calendar clashes with touring shows at the venue, we were unable to provide a consistency to our show dates.

Ready to give up, our Directors were invited to Robin Duke’s retirement party, organised by stag and hen’s favourite comedian, Joey Blower.

Robin had been instrumental in raising the profile of the Comedy Station Comedy Club since we first started out, so we couldn’t miss the opportunity to thank him properly.

It was at this party, where local entertainer and all round lovely bloke, Jimmy Love, introduced our boss to Viva, in Blackpool.

The following week, after a quick meeting with Martin and his Assistant Manager. Bert, we had a new venue, where we attracted comedians such as Charlie Chuck, Gary Delaney, Junior Simpson, Gavin Webster, Tanyalee Davis and many, many names you won’t have heard of, but will in the future!

Finally, we have to say a massive thank you to some people, without whom, we’d never have go where we are today:

Ruth Unitt, for funding our very first shows and allowing us use of her bar for the original publicity photo’s for the Gazette (No, we aren’t going to post these!!!).

Robin Duke, for giving us so much space in the Blackpool Gazette each month.

Andy Brice, for jumping on board and becoming our Brand and Marketing Manager, resulting in making Ryan walk the entire area of Bloomfield Road Car Park, flyering cars (the car park was actually full on match days back then!)

Ian and Kelly Calvert, for giving us that one extra show that we needed, to prove there was a market for comedy!

Michael Sands, for booking amazing line-ups in the early days, also, Show Managing every show for the first 7 years, but mostly, for enduring Ryan Gleeson’s ego every night!

Jen Gleeson, for not killing our resident compere!