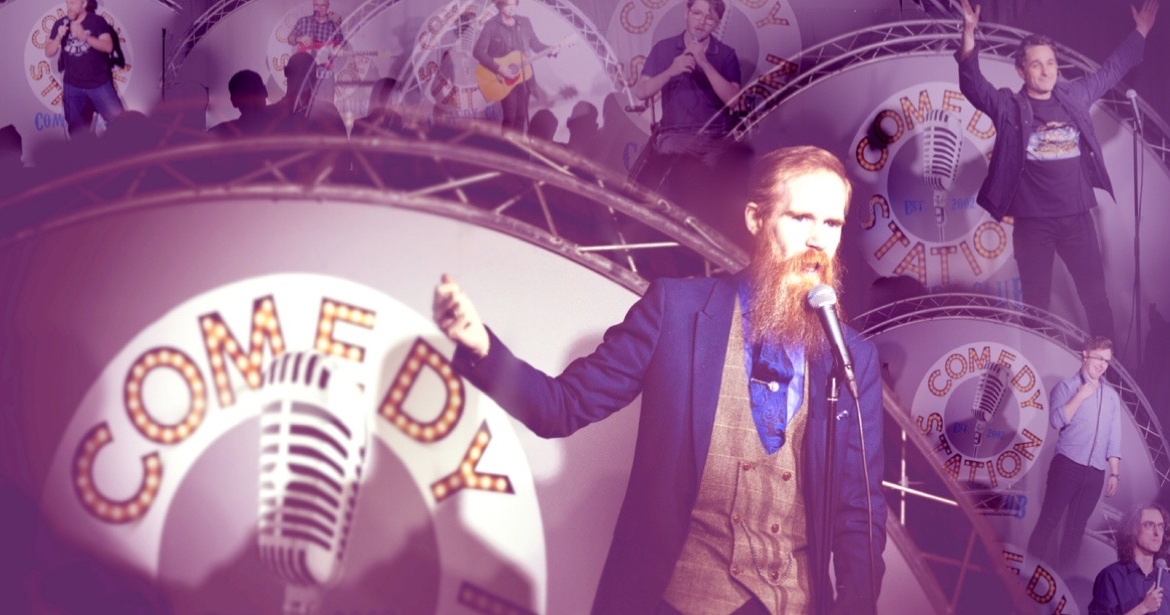 These awards are nominated and voted for, by the industry and we’ve only been eligible for one of the categories, since opening our own venue, in March of this year.
The two awards we’re up for are:
“Best Open Mic Night”
This is awarded to the best show, which is specifically aimed at growing and developing new talent.
Our show, “Gleeson’s Massive Gong!” has been shortlisted.
This show occurs on the first Thursday of every month, where 12 new comedians have to stay on stage for 5 minutes, however, the audience can vote them off, if they’re not funny.
If more than one comedian lasts the full five minutes, there’s a “clap-off”, to decide the winner, who goes home with a cash prize and a paid spot at a future “Gleeson’s Massive Gong!” show.
It’s quickly become popular with audience members and comedians alike, as the audience are completely in control of the entire night, so nobody knows what will happen.
The other shortlisted shows for this category, are “Beat the Frog”, at the Frog & Bucket, “The Comedy Balloon”, a new material and new comic night and “New Stuff”, at the Comedy Store. All of which, are in Manchester.
The second award we’ve been shortlisted for, is the one we’re most proud of:
“Best Comedy Club.”
This category is made up of all of the big, purpose built comedy clubs in the North West, including The Comedy Store, The Frog & Bucket and Hot Water Comedy Club.
Despite running shows across the Fylde Coast since 2002, we’ve only actually had our own premises, since March of this year, so to reach the final four of this category, after just 9 months is astounding.
There’s some stiff competition in this category, with the three other shortlisted clubs being The Frog & Bucket, in Manchester, XS Malarkey, also in Manchester and Hot Water Comedy Club, in Liverpool.
Just to even be considered in this category, shows how respected we’ve become and even if we don’t win this, we’re over the moon.
The winners will be announced at the North West Comedy Awards ceremony, at the Frog and Bucket Comedy Club, in Manchester on 8th January.
On top of these nominations, the Comedy Station has recently reached the top spot in TripAdvisor’s “Nightlife”, “Concerts and Shows” & “Comedy Club” categories, for both Blackpool and separately in the entire county of Lancashire!
These nominations and ratings would not be possible, without the extraordinary commitment of our General Manager, Jen Gleeson, who not only works full time for the NHS, but is also a registered carer for a disabled adult family member, mum of five and still fits in over 20 hours a week, with us, ensuring our customers are well looked after, from the moment they enter the building, until the second they leave.
She really is Superwoman, as far as we’re concerned and any awards we win should just have her name on them.
In the meantime, it’s business as usual for us, apart from a short break, in the first weeks of January.
Over Christmas, we’re open on Thurs 19th, Fri 20th, Sat 21st, Sun 22nd, then Fri 27th & Sat 28th.
After this, we’ll be taking a short break, until Friday 17th January, when we’ll be back to running shows every Thurs, Fri, Sat & Sun throughout the year; hopefully, with some shiny new trophies to show off!
Tags: Blackpool, Blackpool comedy club, north west comedy awards, stand up comedy, stand up comedy in blackpool, things to do, things to do blackpool, things to do in blackpool, whats on, whats on blackpool, whats on in blackpool